We try our best to ensure all details below are up to date but advise you to check for yourself before making plans.

Various events, Dawyk Botanic Gardens from May until October, Guided bird walks, yoga, exhibitions and much much more!

The Mighty Deerstalker, Traquair House 16th March An adventure running event with a difference! This is probably the hardest off-road-Tweed-clad-pipe-lit-plus-four-and-headtorch-wearing run that exists. 5km and 10km runs start and finish at Traquair. Start at 5pm.

Vallelujah Enduro 2019 23 &24 March , Glentress A Tweed Valley enduro adventure. The first event of the triple crown series a chance to ride away the winter blues. The course as usual will be kept under wraps until the event, but the stages will provide an awesome day out – and something a wee bit different. It’s a chance to ease yourself into the 2019 Enduro calendar.

Easter Eggstravaganza , Traquair House 21st April With the largest hedged maze in Scotland, there could be no better place for an Easter Egg Hunt. Now in its 19th year, there will be 6,000 mini eggs to be found during a series of egg hunts throughout the day and we guarantee no child will leave empty handed.

Ruff Dugger, Traquair House 18th May  Ruff Dugger is trail / mud / obstacle runs you can take part in with or without your dog. This will test your fitness and team working skills to the max. Come and take part in Scotland’s leading obstacle , mud trail run for runners with their dogs.

Ruff Dugger in the Grounds of Traquair 19th May at 3:00 pm – 7:00 pm Ruff Dugger is trail / mud / obstacle runs you can take part in with or without your dog. This will test your fitness and team working skills to the max. Come and take part in Scotland’s leading obstacle , mud trail run for runners with their dogs.

Scotland Garden Scheme Charity Opening Laidlawstiel  Clovenfords 22 May 10am – 4pm (60% admission to  CLIC Sargent: Ciaran’s House). Walled garden containing herbaceous border, fruit, and vegetables in raised beds. There are colourful rhododendrons and azaleas as well as splendid views down to the River Tweed

Tweedlove Transcend Epic 7-9 June, Innerleithen Two big days racing on sweet Tweed Valley dirt, with uplift and shuttles all day and a proper bike festival to come back to at night.

Cycle Law Scotland Skinny Tweed 16 June, Peebles Skinny Tweed is all about a great road ride, in good company, with smiles all the way. If you’ve never done a Sportive before, this is the perfect opportunity to have a go, in a relaxed atmosphere. If you’re training for a bigger event such as the Tour O The Borders closed road sportive, it’s a good way to see how the legs are doing.

Peebles Beltane Festival 16-23 June. A spectacular festival of local legend, history and tradition, with a range of events throughout the week.

Games Week has something for everyone! Music from the wonderful  Innerleithen/Tweedvale Pipe Band and St Ronan’s Silver Bands ( captured below in the  lino print by local artist Neil Stewart of Narrative Ark) Fancy Dress Parade, Quiz Night, Treasure Hunt, Flower Parade, Athletics and much more! The week culminates in a walk up Caerlee to dispatch the De’il for another year. Intrigued? You really need to be there! 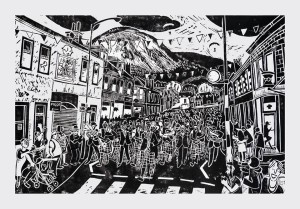 A Dog’s Day Out  Sunday 21 July Traquair House. A special day out for dogs and their owners with all manner of fun activities, competitions, displays and demos, all in the beautiful surroundings of Traquair House.
Peebles Agricultural Show Saturday 17th August 2019 Nether Horsburgh Farm, Cardrona
Scotland Garden Scheme Charity Opening Portmore   3rd July – 28th August (Wednesdays only), 1pm – 5pm or By arrangement 1 June – 31 August (60% admission to RNIB Charity: Peebles Community Talking Book)  Lovingly created by the current owners over the past 30 years, the gardens, surrounding the David Bryce-designed mansion house contain mature trees and offer fine views of the surrounding countryside. Large walled garden with box-edged herbaceous borders is planted in stunning colour harmonies, potager, rose garden, pleached lime walk and ornamental fruit cages. The Victorian glasshouses contain fruit trees, roses, geraniums, pelargoniums and a wide variety of tender plants. There is also an Italianate Grotto and water garden with shrubs and meconopsis. The woodland walks are lined with rhododendrons, azaleas and shrub roses.
Innerleithen Music Festival 16th-18th August always a wonderful weekend in the town!
Tweedlove King and Queen of the Hill  17th/18th August This event is a UK enduro classic, and one of the most popular enduros of the year.
Creative Peebles Festival 23 Aug to 1 September A 10-day celebration of the wealth of creative talent found in and around the town, the 2019 Creative Peebles Festival kicks off with the traditional Open Galleries evening plus a special performance by celebrated singer/songwriter Horse McDonald in the atmospheric venue of the Laigh Hall at Neidpath Castle. Click on the link for details of all performances and events, including live music, theatre, dance, walks, visual arts, crafts, poetry and much more.
Beyond Borders International Festival of Literature & Thought  August 24th & 25th  Traquair House Returning for its 10th year, this event brings together internationally renowned broadcasters, writers, thinkers, artists, diplomats and politicians to meet, talk and exchange ideas with the public about some of the most interesting and pressing issues of our time.  This stimulating weekend of debate also includes bike rides, literary walks, art exhibitions and performances.
Innerleithen Flower Show 1st September Memorial Hall Innerleithen 2- 4.45pm  Displays of local produce: flower arrangements, vegetables, home baking, needlecraft and much much more! Check out the miniature gardens, our personal favourite! Teas will be served.
Tour O the Borders 1st September a classic closed road event which takes you through stunning scenery on beautiful Borders roads. Choose from 88km or 120km routes – it’s a cracking ride!
Peebles Highland Games Saturday 7th September in Hay Lodge Park, Peebles
Scottish Borders Walking Festival 7-14 September. The 25th Scottish Borders Walking Festival will be hosted by Selkirk and the Valleys (Ettrick and Yarrow). Expect a fantastic selection of guided, group walks for all abilities. Great social programme too. See programme for full details.
Scotland Garden Scheme Charity Opening Kailzie Gardens nr Peebles  8 September 10am- 4pm (60% admission to Erskine Hospital, 10am – 4pm  Kalzie is part of the Scottish Snowdrop Festival
Two Breweries Hill Race Saturday 28th September Run from Traquair House in Innerleithen to Broughton in the beautiful Scottish Borders 18 miles with over 4,900 feet of climb
Tweed Valley Tunnel Trail Run 5th October
A fabulous trail running in Scotland’s Tweed Valley A beautiful off-road run through a stunning natural environment – with a very special twist in the tail! From autumnal beauty to underground awesomeness – there’s no other event like it.
All off road. Choice of three distances, approx. 10k and 20k, and a NEW distance for 2018 approx. 4km also open to younger runners.
Tweed Valley Forest Festival Saturday 19th/20th October. Peebles Wood Market, Carve Fest, Scottish Conker Championship and Food Festival all make for a great weekend.
Halloween Ghost Tours at Traquair! 25th /26th October (Friday Tour at 7pm  with dinner after the tour)
Christmas Opening at Traquair TBC
Peebles lights Switch on TBC
Switched on Sunday, Innerleithen TBC

Find more events on our Facebook page   and at
Visit Scotland